Our Journey in Natural Farming

Last year  we began an experiment in raising flowers via what is known as Natural Farming.  Natural Farming was pioneered by Farmer/Philosopher Masanobu Fukuoka through his life long journey in trying find a method of growing grain and orchard crops that most approximates a natural condition.  The 4 tenets of his method are:
As discussed last Spring when we began our first season this will be a multi-season experiment to be able to judge the effectiveness of this technique.  Well, I thought I'd share a pictorial and discussion of how things progressed thru last years season.  From my first post on this last May (see  Quotable Sunday  5-27-2012, I Stopped Fighting Nature) I showed how for the first season we had used a lodged down Hairy Vetch and Cereal rye cover crop as a begining mulch in which to plant.  In the first beds we planted Benary Giant Zinnias. 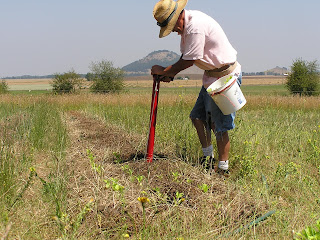 This was Memorial Day weekend that I planted these through the mulch which had been lodged down about 8-10 days prior.   This was a great test because almost immediately after planting we went into a very wet June in which the temps stayed cool and we received several inches of rain over the ensuing weeks.  As you can guess the lower temps inhibited the zinnias from growing rapidly.  The soil temps under the mulch hovered at about 50-52 degrees.  Five days into this cool spell  the slug population really took off and began to inflict heavy damage.  On two one hundred foot rows of zinnias I watched the plants begin to disappear.

I swore I wouldn't resort to controls but would let this play out.  In my heart I knew that my field was out of balance and the natural predators of slugs such as ground beetles hadn't yet begun to re-establish themselves.  So I waited and as time went by and the damage increased I broke down on the 10th day after transplant and put some small used margarine tubs filled with Pabst Blue Ribbon beer around some of the plants that were getting the most damage.  The first night after putting the traps out I did find that they were catching slugs, however I also found significant ground beetles had also been attracted to the traps and had also drowned.  This showed that nature was beginning to work things out and that I was definitely interfering.   I immediately pulled the traps and resumed watching and waiting.  Towards the last week and a half of June the weather improved,  temperatures warmed up, and the rain subsided.  After several days of more normal June weather the soil temps under the mulch moved up to 60-65 and the Zinns really began to start to grow out of their damage.  The pic below was taken on June 30th.  All irrigation is by 3 lines of drip tape with emitters on a 12" spacing. 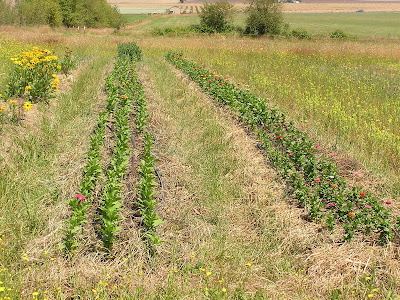 At this point I just monitored for soil moisture and used a hand ads tool to knock down any large periennal weeds that may have survived.  I gotta say I had a sigh of relief when things resumed a more normal growth progression.  The plants at this stage might have been a bit smaller then if they had been fertilized but the basic plant structure seemed okay considering the beating they had been taking from the slugs.  It was interesting to note that at this point in probing in the mulch it was getting harder to find significant amounts of slugs, but there were quite a few ground beetles, arthropods like centipedes/millipedes, and a variety of spiders.

By Mid July the plants had gained enough in height and strength and had begun to bloom at the center.  I was reluctant to pinch this group early on to get better laterals because of the slug damage earlier.  However, hindsight being 20/20 I think we could have pinched the center out around the 4th of July and would have seen pretty good laterals develop. at this point compared to a traditionally fertilized crop we noticed that the plants were still a bit smaller in stature but more sturdy in stem.  The plant spacing was 10-12 inch. 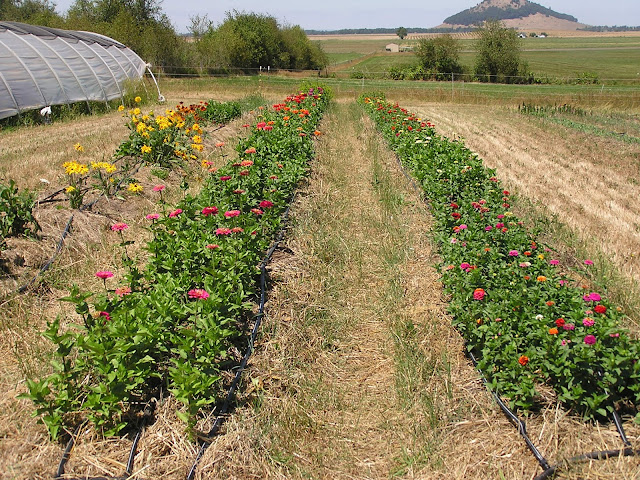 By late July we began harvesting very seriously on this patch. and surpisingly they kept producing good  flushes of blooms through late September.  Our biggest insect pest is the dibrotica beetles(western spotted cucumber beetle)  These migrate in from surrounding harvested grass seed fields starting in late July and can really be devastating to Zinnia blooms.  We did not use any organic pest controls on these plants and I was surprised that the level of damage wasn't that high,  actually it wasn't much different then plants we had used rotenone/pyrethrum based sprays on in years past. This reinforced a perception I had that these sprays and their broad kill spectrum actual probably did more damage to our micro-eco-system then to the targeted pest.

This pic below was taken around October 8th.  Just a note on our weather here last year.  From July 2nd thru Oct 12th (102 days) we had a grand total of .36 inches of rain.  Under our previous methods of tilling the soil and planting in the bare dirt under these conditions we would normally irrigate almost every 3rd day.  Two pulses of 25-30 minutes, one around 7 am and one about 4pm.  This year on these no till beds we needed to irrigate only once a week using the same two pulses. Note that some residual natural grasses had adequate moisture to begin to grow at the base of the Zinn bed. 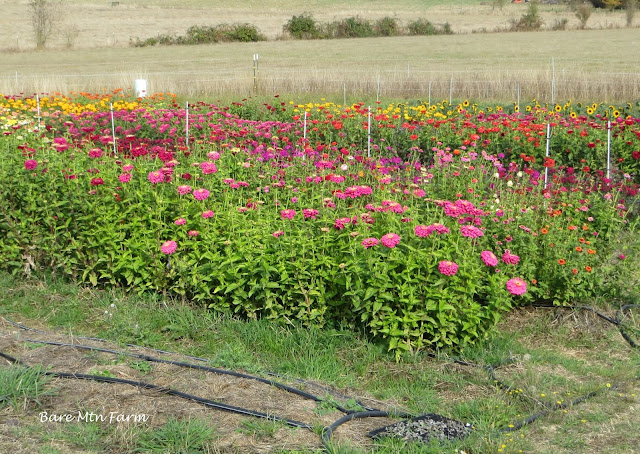 By mid-september I became sort of fixated on how to get the next years cover crop sown.  As you can see we still had a nice flush of growth on these Zinns.  I wanted to use a cover crop mixture of the hairy vetch, cereal rye as in last year but also add daikon seed to help with busting up the clay hard-pan under our shallow topsoil.  I had wanted to make seed balls to broadcast under the foliage of the flower plants but I did not find a local source of  red clay until November.  I tried making the seed balls using some of our subsoil clay but the balls crumbled and fell apart when dried.  So I was stuck with hand broadcasting  the  seed before our Fall rains began in late October.  I picked a day I thought was before the first forecasted rain which was October 11th....actually it rained significantly on October 13th.  I had to relearn(the hard way) what Fukuoka said would happen...The seed would not germinate in time before the herbivores, birds and or insects would get to it.  I had no idea how hungry these seed eaters are at that time of year.  The cereal rye was demolished before any of it germinated, of the vetch maybe 10% germinated but was quickly consumed, but surprisingly the daikon germinated quite well.  I guess the seed eaters around here thought the daikon too spicy?  I tried reseeding a second time near the end of October but got the same result.

So bottom line was we had no real cover crop for the 2013 season other then a light crop of daikon.  So I moved on to plan B which was to leave the crop residue and sparse cover of daikon in place until late February then knock it down while spreading a 1/2 to 1" layer of rotting hay on the top of the beds.  At the end of March I transplanted Snap Dragons and Stock into the first bed 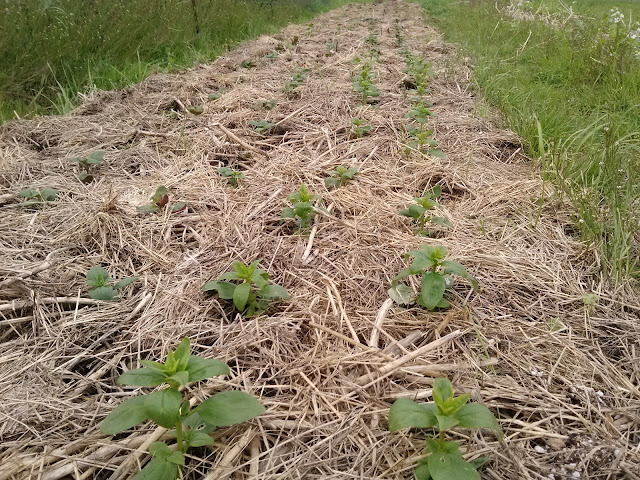 This pic is the same Zinn bed of the photo from October 8, 2012.  Looking closely at the surface you can see last years Zinn residue along with the rotted hay.  This pic was taken two weeks after transplant.  The temps have been all over the place from unseasonably warm to freezing nights.  However, the Snaps are doing well.  In addition, although I can find evidence of slugs I have found very little damage to the plants suggesting that we have reached an equilibrium here(so far!)  The amount of soil life has definitely increased as has the amount of spiders.

I hope to under sow this with Sub clover in late May and then rotate a sunflower crop in over the residue of the finished Snaps.  Subterranean clover or Sub clover establishes fairly well in under foliage of other plants, fixes nitrogen, adds biomass and is an annual, so it will die out in the Fall after some hard freezes. The idea will be to use the seed-ball technique to again sow a daikon/hairy vetch/cereal rye crop under the sunflower residue to establish a lodged down mulch cover like we had in the spring of 2012.  The seed-balls should solve our predation problem that we had with simple broadcasting of the seed.

To date I have solved my clay sourcing problem for making seed-balls and have a vision on how to scale up and automate this process for making them en-mass. That will be a great topic for my next post.

So here we are in year two in following the process of natural farming in this 1/4 acre field.  We have not tilled since the Fall of 2011, we have applied no commercial organic fertilizers, pesticides, or herbicides(Okay..I did some minor hand weeding) but we are now letting nature guide us more and more.   I have to admit I'm not as concerned about our plants not growing well.  I'm sure we will run into failures here and there but I think we are on a good path.

"A true dialogue between (modern scientific) man and Nature is impossible. Man can stand before Nature and talk to it, but Nature will not call out to man. Man thinks he can know God and Nature, but God and Nature neither know man nor tell him anything. Instead they look the other way. God and man are travelers passing in opposite directions.  Like wise for natural farming and scientific farming. These two paths start from the opposite sides of Nature. One seeks to approach closer to Nature, the other to move farther away....."

Masanobu Fukuoka....The Natural Way of Farming..The Theory and Practice of Green Philosophy  1985
Posted by Bare Mtn Farm at 8:00 AM