Looks can be deceiving....

After a couple weeks of lots of rain, a really bad wind storm and night after night of mid thirties, here it was Friday and time to cut for market.  The morning was dark, very foggy and really cold, there just can't be many flowers down there. 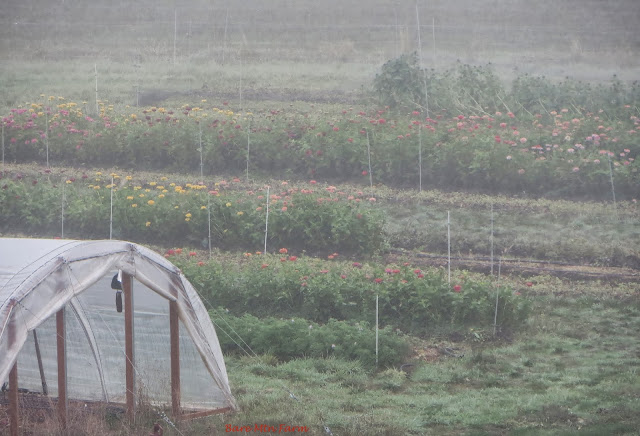 Maybe this is the last weekend at our market, we will take in what is good and left and call it a season for the farmers' market.  All good things come to an end and maybe the end is here and clean up is the next phase.

With the wagon loaded up with buckets, the cutting began. But first a few photos of what is left, not much, I believe. 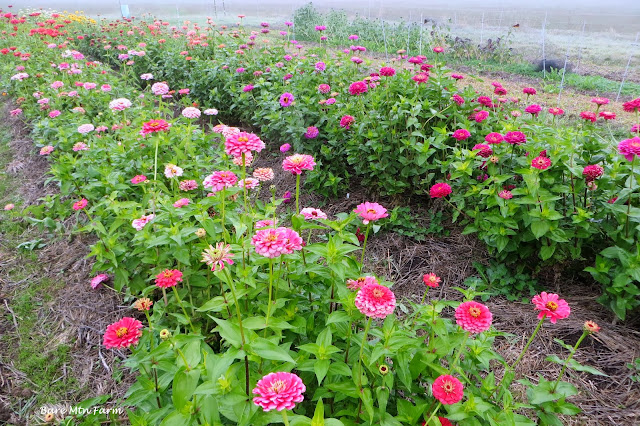 Zinnias still standing after 45 mph winds and horizontal rain. Definitely some leaners and some that are spent. In the distance you can see a small stand of some sunflowers we were hoping for the last market.  They were down in the dirt, mangled and messed up. 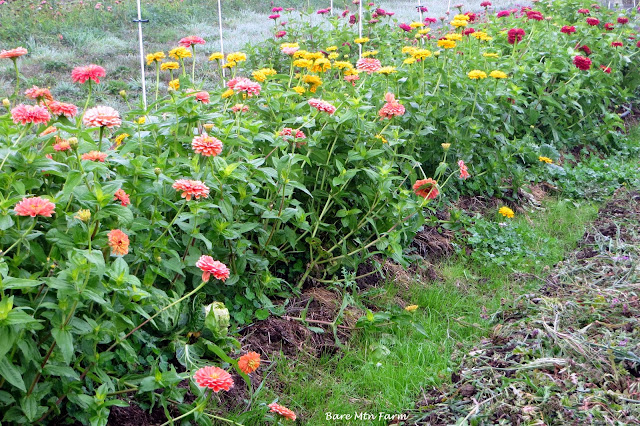 It was cold, damp and time to get cutting; at least to warm up.  After a hour or so here is the first wagon load.  I call it the Hot Pink Pizazz Load. 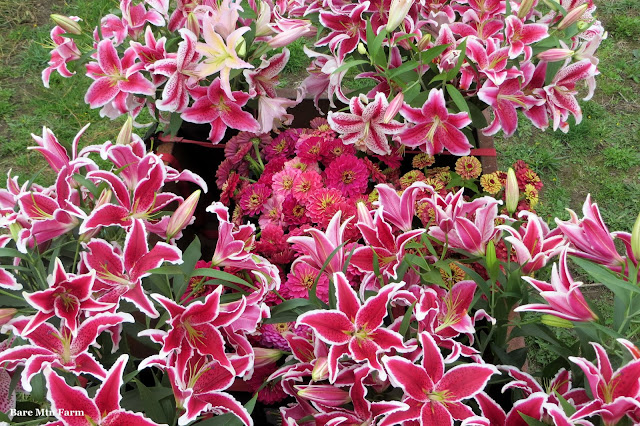 Oriental lilies came on fast in the past two weeks.  The fragrance was wonderful, the color was bright and bold and these would be popular. 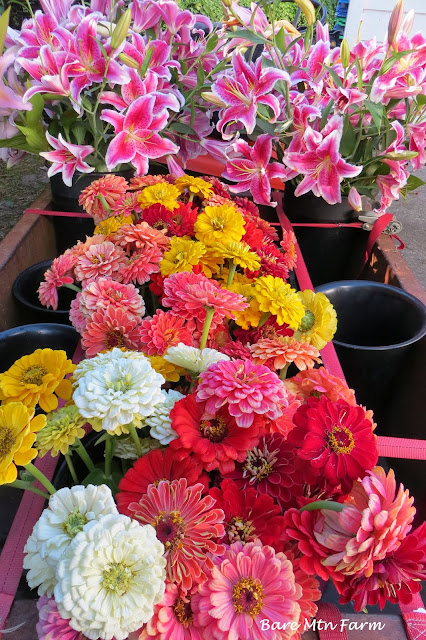 This is the quickie, it is time for lunch load.  This load is called Pink Pizazz Part Deux

The next load was picked in the sunlight that finally appeared after our lunch. It was warm, the dampness was gone and the flowers seemed to glow.
This is the Fall Bright Load 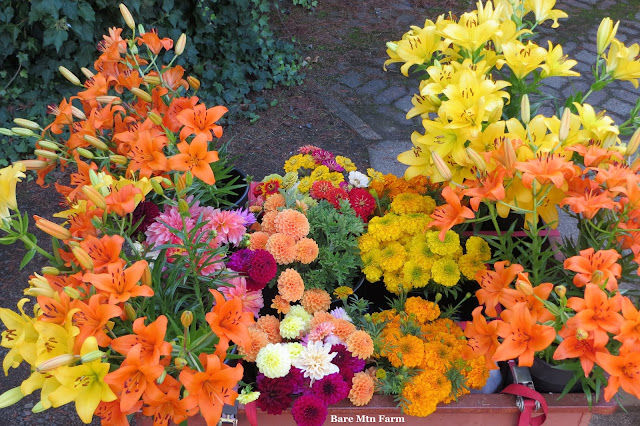 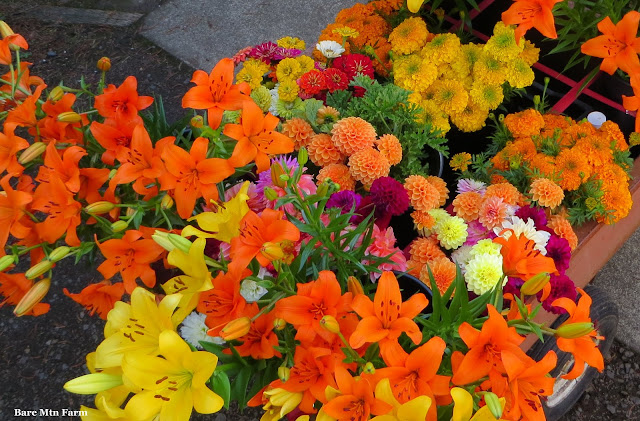 Back to the field we cut some more and loaded up again.This is the Pastel Load of Pretties. 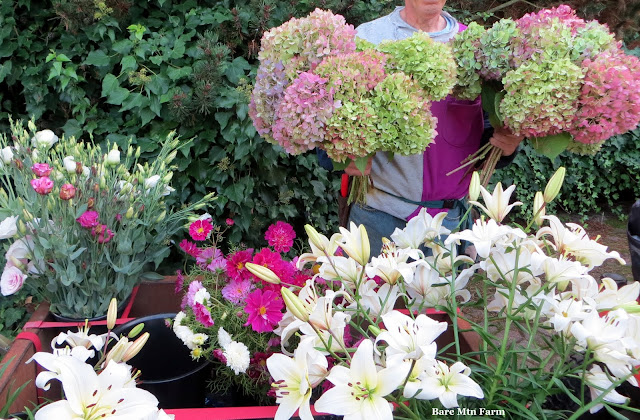 Hey there were more flowers down there than we thought there would be to cut. Foggy looks can be deceiving. 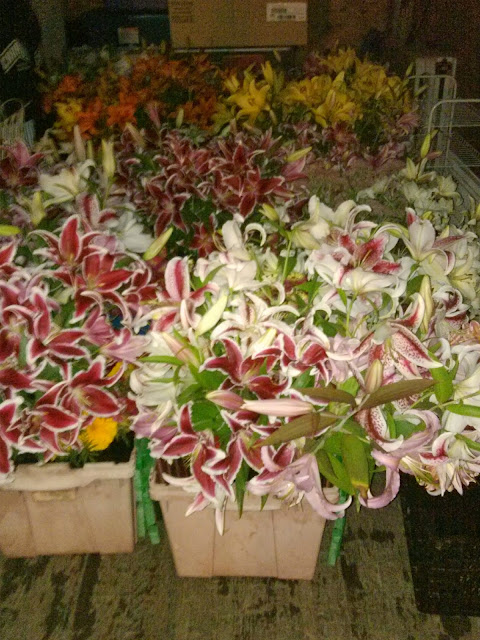 A full truck load at 6:30 a.m. on another very foggy morning on the way to the farmers'  market. 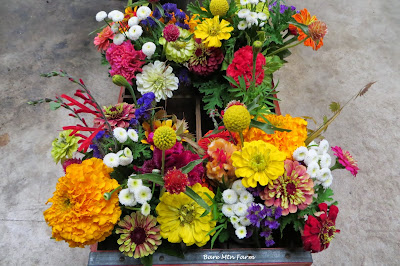 These are the last little jars of flowers I made for market restaurant. They are done for the season. Drat, no more yummy bacon and eggs for breakfast till spring.

O hushed October morning mild,
Begin the hours of this day slow,
Make the day seem to us less brief...
Retard the sun with gentle mist;
Enchant the land with amethyst...
~Robert Frost
Posted by Bare Mtn Farm at 8:30 AM