Quotable Sunday 5/19/13: A Reconnection with a Lost Tool(Art)

This is one of those times when I wish I had had a chance to meet and to have learned some things from my Great Grandfathers.  You see I recently began a journey back to using an old hand tool, the scythe.  I bet I could have either received great council on how to peen and sharpen blades, proper mowing techniques or most likely I would have been told to run away from the idea of using a scythe as fast as you can.  I am German/Irish so naturally I'm opinionated and quite stubborn, so guess which way I went?

We have many areas on our farm which are almost impossible to mow with a riding lawnmower or even a push power mower. In the past we kept these areas cleaned by chemically burning vegetation down with herbicides like Roundup. When we switched away from chemicals a number of years ago these areas began to recover and be repopulated with mostly grasses and other native annuals and perennials.  I originally tried to keep these things cleared(to my thinking under control) by spending a lot more time with a 2 cycle blue-smoke sputtering, highly noisy,  motorized weed string trimmer.  This sort of worked but what I found due to ethanol in our gasoline, the vagaries of constant cleanings & repairs, string replacement, fuel mixing I was spending about half again the amount of time that I was running the equipment trying to keep it running. Thing was as these things aged it didn't get any better.  Truth is we went through two different makes of grass/weed trimmers in over 5 years and I was looking at spending another couple of hundred dollars replacing our last one this year and decided to try something entirely different, something that worked quite well in the past, the scythe.

Denise thinks I'm a bit crazy, "why do you want to go back in time?" she says or "you know there is a reason people don't use scythes anymore".  Well sure on the surface it seems like using a hand tool with a bad reputation as a back breaker is kind of a dumb idea.  However, I said I did research.  Seems that there are two different classes of scythes, the American models and the European models.  The traditional American scythe is a heavy tool in most cases was not very ergonomically designed and tended to tire the user quickly.  In addition, the American blades were mostly stamped out of a lower grade steel and tended to need major resharpening quite often.  This quickly dulling blade leads to more difficult cutting.  The European designed blades are hand forged of high carbon steel and hold an edge much better.  The European handles called snaths were made lighter due to the better cutting blade.and the snathes are correctly sized to the user.  The European models weigh about 4 lbs(with blade), the traditional American model about 8+ lbs.  So in a nutshell the American model compensated for a lower cost less effective blade by using a stouter heavier standardized snath so that the additional weight and force by the user would do more of the cutting.  Guess how the user felt after being subjected to this tool after a few hours.

I think I became sold on the European design and the scythe as an effective tool after watching several videos of the tool being used in various circumstances.  The most interesting was the competitions between a scythe and a motorized string trimmer cutting tall grass.  The scythe mower beat the motorized trimmer by almost a minute on the same sized plots, repeatedly. Okay, I admit scythe time trials are a little weird but kind of entertaining.

So this month I took the plunge and ordered my scythe from a company formed in Maine 11 years ago by a lot of passionate people that have a desire to bring this tool back from obscurity.  It arrived last week and I was able to put it all together and test it out today.  Denise documented this with pictures for insurance purposes(just kidding). 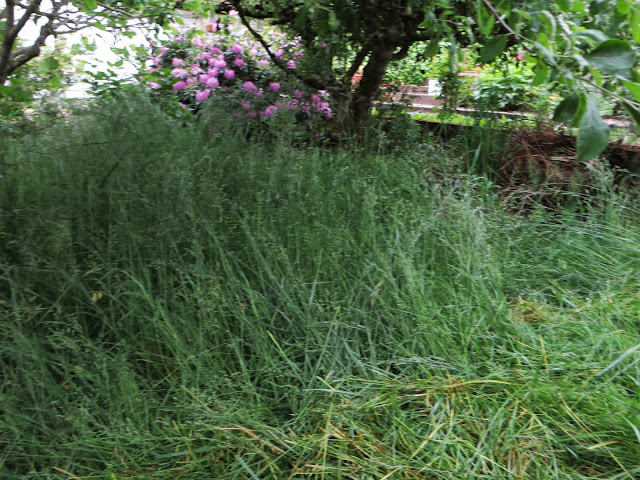 This was our first test plot.  In our orchard we had some pretty tall grass, basically ready for haying.  This grass is thick and about 3 foot in height.  So this is where I started.  Remember, I'm a total newbie and had never used a scythe before. So I started cutting a path. 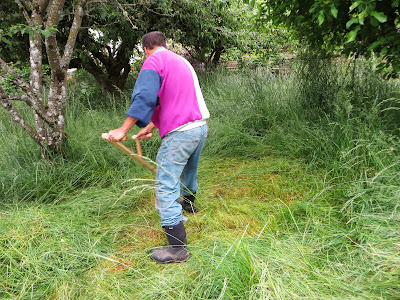 This tool was so light and sharp  it cut through the grass with ease. 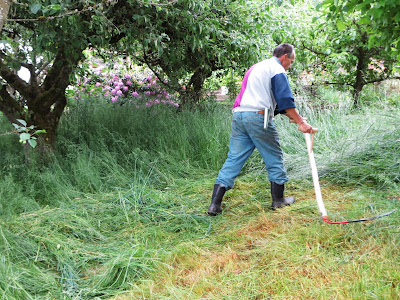 Due to the tight space between the trees I wasn't able to take full swings but the grass cut nicely.  The sharp blade cropping it about 2" above the ground  and depositing the cut material to my left. 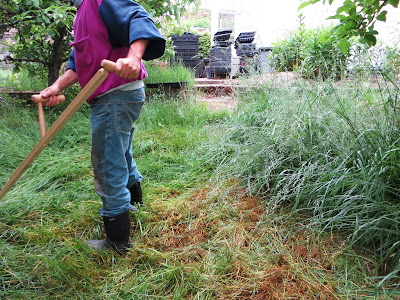 I was able to cut a path from our green house to a more open area where I could utilize a more wide open mowing swing.  The path, about 40' long and 8' wide took me about 10 minutes to cut.  I know a more experienced person could have done this in a fraction of the time. Once in a more open area with less obstacles I was cutting pretty fast. 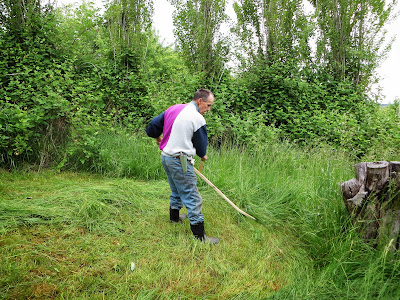 I was able to pretty much get 7' wide swathes on each cut. Again the cut grass is put into a windrow at the edge of the stroke. 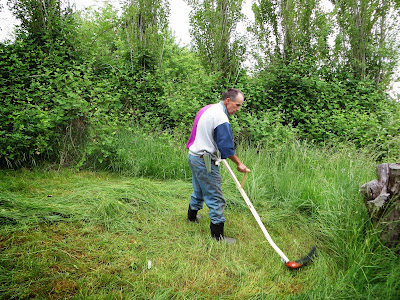 Most of my cuts were clean but I admit, like my golf swing I have a tendency to pull my head up near the end of the cut rotation, this makes an uneven cut.  So I did have to go back and tidy things up. 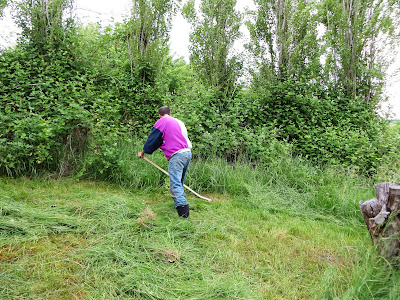 I didn't spend long on this patch which was about 50' by 50' of tall hay like grass.  I was able to clear this in about 20 minutes, counting the 2-3 times I stopped to whet(hone) the blade. 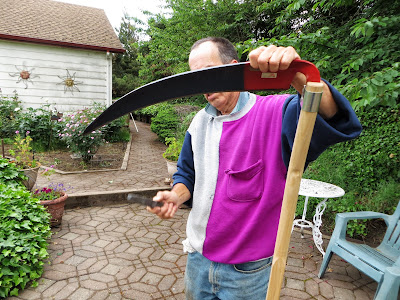 Me using the whetstone before getting started. Whetting(honing) with the stone takes about 15-20 seconds each time you do it and you do it when you notice your cut efficiency dropping off. 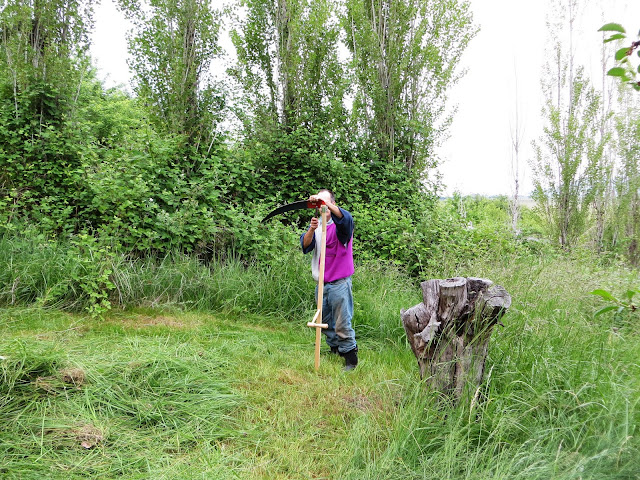 Here I am stopping to Whet the blade in the field.  This brief pause also gives you a chance to look around at what you've done and where you want to go.

Based on the limited test cuttings I did today I am impressed with this tool. It functions as advertised, cuts efficiently and smooth and did not feel fatiguing at all. I have a lot of potential use for this tool from cutting cover crops on raised beds to keeping the areas around the hoop houses clean this is going to be a real time saver.

I have to say that the thing that I noticed more than anything else was the sound of the blade swishing through the damp grass, the feel of the cut, and the work being done effortlessly with the sounds of the birds still being heard.  ( also, I didn't have to suck down any blue-gray oily exhaust either).  I have a lot to learn with this tool, how to be better using it, how to continue to properly take of it, and all the places that I can effectively use it on the farm.  I think I will be using this tool for quite sometime to come.
--Farmer Tony--